Kathleen of Rancho Murieta, California and the 14-year-old Hanoverian mare scored 70.200 per cent in a class that included four combinations new to the international Grand Prix arena but did not threaten the pair that is aiming for a place on America’s team at the World Equestrian Games in Normandy, France in August.

Elizabeth Ball of Cardiff, California and her Liaison that she bought from Gaston Chelius of Luxembourg and were competing for the first time together in a CDI Grand Prix placed third on 67.120 per cent.

“I was thrilled with her,” said Kathleen who is now in the fourth year of competing Breanna (Brentano II x Weltmeyer) at international Grand Prix, “especially with the consistency and relaxation. She felt very solid.

“We haven’t shown since the Festival of Champions last fall in Kentucky, so I knew we needed to get back in the arena. Now that we have this first ride of the year under our belts, I feel like we’re ready to push on and add more to it. I feel like this success sets the tone for the rest of the year to come.”

During the summer, Kathleen showed Breanna in both international and national competitions in Europe, receiving higher scores than usually awarded in the United States. Among her successes were individual third places at Lingen, Germany and Hickstead, England where she was on the American silver medal team in the Nations Cup.

Elizabeth Ball’s third place finish with Liaison came on the same day she was runnerup on Avanti in the Prix St. Georges, only their third time in the CDI arena. Her own success came the same weekend that Denmark’s Anders Dahl won the Prix St. Georges in the Barcelona Spring Tour aboard Selten HW, the horse Elizabeth sold after establishing an historic young horse sweep in the United States–as four, five and six-year-old champion.

Charlotte Jorst, the fashion watch and athletic clothing designer who switched citizenship to the United States from Denmark, showed for the first time Nintendo, an 11-year-old KWPN gelding that she bought last November. The horse had been competed at Grand Prix by Thomas Sigtenbjerggaard and was bought by Charlotte, of Reno, Nevada as a U.S. team prospect for the WEG.

Charlotte and Nintendo were awarded 62.680 per cent.

The pair were scheduled first to go in the Grand Prix but a rearrangement in the location of judges from a previous class led to Jan circling the competition arena for several minutes–some estimated the time at up to 10 minutes–that on top of the warmup led to the stallion running out of gas. 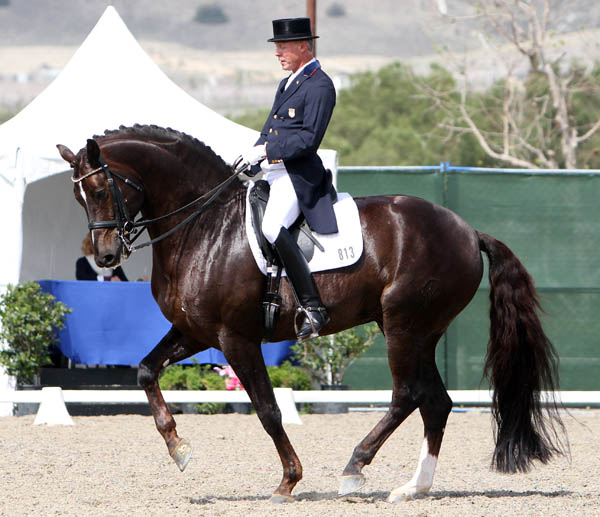 Jan said after the ride he was disappointed but could not have foreseen the time in the competition arena that affected the 11-year-old Hanoverian, the 2010 champion of Germany’s most prestigious small tour event, Nürnberger Burgpokal. The horse was bought by a group led by the owners of the Olympic celebrity horse Rafalca as a prospect for Jan for the 2016 Olympic Games in Rio de Janeiro.