The International Equestrian Federation “strongly recommends” closing all horse shows worldwide for the next four weeks, in a statement issued Friday just hours after cancelling the World Cups of dressage and jumping scheduled for Las Vegas in mid-April because of the coronavirus outbreak.

The FEI recommendation came after the U.S. Equestrian Federation made similar proposals by recommending suspension of USEF-licensed competition and declaring that results will not count toward selection for such major events as the Olympics in Tokyo in July.

At least 123 competitions in the next four weeks are on the calendar of the FEI, the governing body of international dressage, driving, endurance, eventing, jumping, reining, vaulting and para dressage.

“The spread of the coronavirus Covid-19 has taken a rapid turn for the worse and sport worldwide is affected,” the FEI said in a statement. “We as a community have to make our contribution to limit the spread of this virus, as the sooner it can be contained the sooner we will be able to get back to normal life and normal sport. And this is something that every other sport is doing.

“The FEI appreciates the amount of work and incredible investment every organizer puts into their event. While the FEI does not itself organize any FEI Events, in light of the escalating numbers of persons affected by the virus and the restrictions imposed by national governments, the FEI strongly recommends that organizers should cancel all events for the next four weeks until a reassessment of the situation can be made.

“The FEI and Board will work together with the International Equestrian Organisers Alliance to evaluate what can be done to try and accommodate dates for events that have been impacted during this period.

“We are aware that this is no simple matter, as clearly no single Organiser can be favored to the detriment of others, and we do not know how many events will be impacted nor how long the current situation will last.

“We have decided that calendar fees for events that have had to be cancelled because of Covid-19 will be waived. We are also assessing the impact of cancellations of Events on other areas such as ranking points and on athletes and horses seeking MERs (minimum eligibility requirements) for the Olympic or Paralympic Games and qualifications for FEI Championships.”

The CDI3* scheduled for Tryon, North Carolina April 16-19 is outside the FEI-recommended closure period and the organizers are proceeding as if it will go ahead.

Uncertain, however, is the status and extent of a European tour of up to eight prospective American Olympic team combinations.

The tour had named Nations Cup events in Compiègne, France May 14-17 and Aachen, Germany June 1-6 as events where Americans would compete. The schedule was made before the coronavirus pandemic, and is expected to be re-considered shortly. 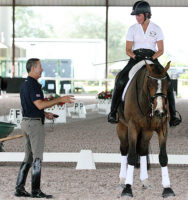