Wilton, Retired After Meltdown, Brought Back & Retrained by Anna Buffini to Compete at Big Tour

2 years ago StraightArrow Comments Off on Wilton, Retired After Meltdown, Brought Back & Retrained by Anna Buffini to Compete at Big Tour

WELLINGTON, Florida, Feb. 19, 2020–In an amazing transformation, the 17-year-old Wilton has been competed by Anna Buffini at Big Tour three years after the KWPN gelding with a “screw loose” was retired from the same Florida show grounds following a monumental very public meltdown.

When Anna and her coach, three-time American Olympian Günter Seidel, were unable to find the right horse for her to continue competing in the Under-25 division and move on to top sport, they decided to bring Wilton out of retirement and begin training him like he was two years old. More importantly, Anna worked to earn Wilton’s trust to overcome the fears expressed by many, including her family, for her safety.

The effort, Anna told dressage-news.com, “was so fulfilling, almost more than any other horse I’ve ridden because of how tough this journey has been, how hard he is.. We’ve finally gotten to a point I can get on him and I’ve had some of the best rides of my life.”

Some of those best rides on Wilton include becoming United States Under-25 Brentina Cup champion last year.

Wilton came to Anna at San Diego, California in 2015, a year after a competing Sundayboy in 2015 for nine straight victories in Young Rider CDIs. But Sundayboy, a KWPN gelding, moved up to Under-25 division a year later and although he was successful he was already 16 years old.

“From the very beginning,” Anna recalls of her experience with Wilton, “he was very difficult. He is a Jazz and those are known for having a little bit of a screw loose, which he can have. He was getting more and more difficult.

“It really came out when we brought him to Florida for the first time. It got to the point where he was so dangerous. He kind of melted down and after his meltdown I decided with the team to retire him to Ocala (240 miles/386km) north of Wellington. We sent him up there literally the next weekend. I said goodbye.”

He was really happy in his retirement home of lots of grass, turnout and pastures.

“I thought that was the end of our story,” Anna said. “I flew home to San Diego with just Sundayboy.”

Eight months later, with Sundayboy retired Anna had no horses and nothing on the horizon.

She and Günter had a meeting of the minds–both asking the same questions: “What about Wilton? Should we try and bring him back?” laughing at the seeming outrageous idea.

Her parents, she said, were “definitely concerned, but weren’t as excited about it as I was, for sure.”

Wilton was brought back to Southern California, given a little while to adjust and then, although he was 14 years old, literally started from the beginning, like a young horse, with the tack and every other young horse approach.

“He was no longer a kid, but we treated him like a two-year-old, like a baby,” Anna said. “He’s very skittish, scared of everything. We had to figure out how to work with his brain if he’s ever going to be rideable. We went to the round pen, reintroduced him to riding. I‘m on his back on a lunge line with Günter… a 14-year-old almost Intermediate II horse in the round pen.

“We took our time. I had no timeline for him, there was no rush. I had no other horse so I was able to completely invest in him, I got to spend more time with him than ever before. I got to know every single detail about him, how to put a saddle on him. You have to put a saddle on him in a specific way. One time it was put on wrong and he reared up and flipped over.

“If you do everything correctly with him, how we retrained him and learned how to work with him, he’s a good boy. But you have to know him, better than you know yourself. So we took the fall and winter of 2017 just bringing him back. And Gunter, of course, with his knowledge helped me so much.”

Wilton was ready to show in 2018 but he got injured and another year was lost.

In fall 2018, Anna got on him and thought, “Do I have to bring him back all over again because he had been hand walked for eight months,” she said. “I got on, we took it slow but he seemed to pick up right where we left off—everything we had trained in the fall of 2017 he brought into the fall of 2018.

“It was incredible! I didn’t know if our experiment would work. That was really encouraging. I learned so much about him that I’m able to manage him. He’s still by no means easy and still has a screw loose. Now I’ve learned to manage it. I can give him confidence.

“It showed me our training, our retraining had worked and was really coming together. It was so fulfilling, almost more than any other horse I’ve ridden because of how tough this journey has been, how hard he is.

“We’ve finally gotten to a point I can get on him and I’ve had some of the best rides of my life.

” I have to know him that well in order to show him or I can’t get on him without doing things a certain way, how we’ve learned to work with his brain.

“I had to become a much better rider to be able to show him in the Grand Prix. I can honestly say that Sundayboy was the rocket for me to get anywhere. But Wilton has made me the rider I am today. He’s the reason I’m a professional and can get on a wide variety of horses and ride them and figure them out.

“I owe a lot to him, as hard as the journey has been. Looking back it’s been worth it, the school of hard knocks. It’s been hard but it’s been good.

“You can’t underestimate the word ‘perseverance.’ You definitely have to be safe and smart, but don’t give up, just never give up, keep working hard.” 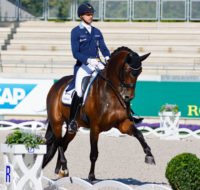 Fiontini, the triple world young horse champion, has been bought by Anna Buffini of the United States Read More