4 years ago StraightArrow Comments Off on Ellesse Tzinberg to Go to Paris World Cup Final, 1st from Southeast Asia

WELLINGTON, Florida, Mar. 14, 2018–Ellesse Tzinberg representing the Philippines has become the first rider from Southeast Asia to be invited to the World Cup Final in Paris where she will ride Triviant that Germany’s Matthias Alexander Rath twice took to the annual championships almost a decade ago.

“Last year I tried to make it to the final and didn’t,” she told dressage-news.com. “This year I put in an intent but no way did I think this was going to happen. Even after I heard, I didn’t tell my parents. I was really scared it wasn’t going to happen.”

She did tell her groom, however, to make sure she had a passport for herself.

Ellesse is one of four riders–Laura Graves and Shelly Francis of the United States, Yvonne Losos de Muñiz of the Dominican Republic are the others–to qualify for the World Cup at Wellington’s Global festival. Sweden’s seven-time Olympian Tinne Vilhelmson Silfvén also earned more than half of her 54 points at Wellington to qualify for the final.

Ellesse, a 27-year-old former Paris fashion runway model now based in Wellington, was surprised by the selection as she has been focused on qualifying for the World Equestrian Games in Tryon, North Carolina to become the first Filipino to go to the global championships held once every four years. She has one of the two qualifying scores.

In Wellington, Ellesse works horses for the American Kent Farrington, the current world No. 1 jumper rider, 2016 Olympic and 2014 World Games U.S. team rider who had won the Geneva Grand Slam of Jumping and looking to the next leg in ‘s-Hertigenbosch, Netherlands a week ago, when he was injured in a fall.

Paris has good memories for Ellesse. She was living in an area near where the World Cup Final will take place and was at Notre Dame while in school there 17 years ago when she was “picked up” by an agent for one of the world’s largest modeling management concerns. She modeled there for six months before moving to California to obtain her bachelor and master’s degrees in communications at the University of San Diego and competed as a jumper.

She sold her horse, car, clothes, books, modeling gowns and everything else of value to move to Europe to pursue her passion for dressage. While there, she was given a full sister to Carl Hester’s 2012 Olympic horse Uthopia but the the horse preferred to jump.

Ellesse moved to Sweden to learn dressage and eventually ended up with Triviant, that was ridden by Charlotte Haid Bondegaard after Matthias Alexander Rath who had taken the KWPN gelding to World Cup Finals in 2009 and 2010.

Ellesse grew up riding Thoroughbred race horses in Singapore where her parents–her father is from Chicago and her mother from rural Philippines–had opened a bed and breakfast. Thirteen years ago, her father established a rehabilitation and retraining center for horses from the track. The center began with seven stalls and now is up to 27 stalls.

Her father who runs the family hotel and her mother is the chef, she said, refuses to sell out unless he’s assured the horses will be cared for. 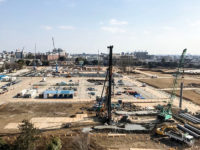 George Morris is being sued in New York by two men who allege they were raped as teenagers by the 1960 Olympic silver medalist and former United States team... Read More