Anna from Dunnellon, nearby WEC, and the 12-year-old KWPN gelding posted their third Big Tour win in only the seventh outing since the pair’s debut at Grand Prix last March. The pair will perform in the Freestyle Friday night.

Sarah Tubman of Wellington, Florida and First Apple, the 12-year-old KWPN stallion that competed in Europe over the summer, was runner-up on 69.783% in the unseasonably cold outdoor night time class.

Benjamin Ebeling also of Wellington on the 14-year-old Danish Warmblood mare Indeed was third on 67.326%.

Anna said that Fire Fly can “be a bit spooky sometimes,” but she was pleased with the relaxation he showed Thursday, which was clean of mistakes.

“There were a couple of things that we can do better,” she said. “He just gets a little tense and wants to do it so badly. He doesn’t want to make a mistake. Throughout the test, he relaxed, and he gave me a really good feeling.

“Every single time that we go out, he gets better and better. I’ve watched the freestyle a bajillion times on the practice video. I think that I’m going to go for it. This is my plan right now.”

Mikala Münter on Salsa Hit, 13-year-old British-bred Oldenburg gelding, won the Grand Prix for the Special for the first Big Tour victory for the Danish-born rider since competing under the Stars ‘n’ Stripes four years ago.

Mikala returned to riding recently after breaking her leg in a horse accident in the summer that prevented riding for three months. Based in Wellington, the former Danish team rider first competed Salsa Hit at Small Tour in 2019 and moved up to Grand Prix two years later.

Emily Miles of La Cygne, Kansas, and Java Dulce, 11-year-old Danish Warmblood gelding, were third on 66.609% in their first performance at the World Equestrian Center

Mikala said she was pleased by the maturity and poise displayed by Salsa Hit.

“A lot of times I’ve just been along, hanging behind him, and he’s been flying around the arena,” she said. “I wasn’t really in control. This was probably the best test I’ve had, control-wise. He was through, he was waiting for me; I was allowed to drive and push the buttons a little bit. I’m not used to that feeling. Hopefully, if this is his new self, then that would be wonderful, and I could push a little bit more. He loves this so much. He’s the one who is telling me how it goes.” 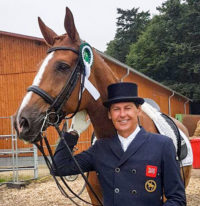