Valegro, ridden by Charlotte Dujardin to three Olympic medals, met a version of himself when he went to the unveiling of a half-size statue of himself that will eventually be located in the center of the town of Newent, England, near the full size horse’s retirement home at Carl Hester’s farm.

The statue of “Blueberry,” as the now 18-year-old KWPN gelding is nicknamed, was sculpted by local artist Georgie Welch.

Carl Hester and Alan Davies, the groom, joined Valegro and Charlotte for the unveiling of the statue that was the result of work by the volunteer Newent Initiative Trust. The project was underwritten by copies of the sculptor’s preliminary work and raffle tickets.

Carl said, “I’d like to thank the team at the Newent Initiative Trust for getting this off the ground so that we can actually have a statue of Valegro in the town. After the Olympics in 2012 Charlotte got a gold post box in the town and all these years later, to follow it up with this statue of Valegro is so exciting–not just for fans of him but for our local area. I hope it will bring people into the town to see Valegro.

“He’s still as star. Many might imagine a gold medalist to be a fiery, wild beast that needed taming but Valegro is far from it. We have sick and terminally ill children come to the yard and they can ride him, he brings so much pleasure to them. He’s regularly ridden by another Olympian that lives in Newent, Trish Gardner, who’s in her 80s and he takes her round the country lanes, eating the hedge as he goes and they have a fabulous time together twice a week.” 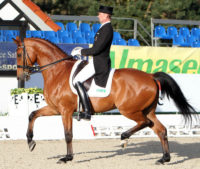