WELLINGTON, Florida, Jan. 19, 2020–The U.S. Equestrian Team Foundation “Take Me to Tokyo” gala chaired by Bruce Springsteen and Patti Scialfa raised $1.5 million. The fund raiser brought the total of the Raising the Bar Campaign to well above $30 million toward a goal of $40 million.

More than 500 guests attended the event hosted by honorary chairmen Lou and Joan Jacobs at their Deeridge Farm in Wellington to support American riders and U.S. teams heading to the Olympic and Paralympic Games in Tokyo in summer.

A Harley Davidson motorcycle and a Fender guitar, both signed by Bruce Springsteen, raised more than $300,000 after the singer incited higher bids by offering to sing if the value reached a certain level–which he did.

Among lead donors named during the gala were: 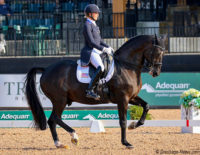