WELLINGTON, Florida, April 5, 2018–American and Philippine horses were heading to Paris Thursday for the World Cup Finals, including the 2017 dressage reserve champion and the defending jumper title holder.

Verdades, with rider Laura Graves as his traveling companion, as usual, is one of the two American combinations in the lineup of 18 horses and riders for the 33rd annual championship on the flights organized by the Dutta Corp., a sponsor of the United States team.

Laura and the 16-year-old KWPN gelding were reserve champions to Isabell Werth on Weihegold OLD at Omaha in April 2017 then four months later beat the world No. 1 combination at Aachen, Germany, the only pair to do so since the Rio Olympic Games. 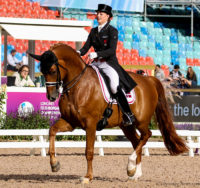 Cathrine Dufour and Cassidy jumped to No. 3 in the world in the latest rankings, swapping places with Isabell Werth and Emilio that the young star beat last month... Read More