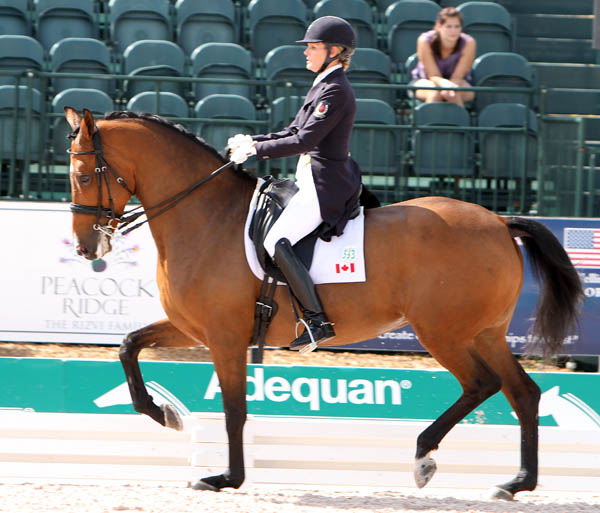 Ashley Holzer rode Tiva Nana to victory in the Dressage at Devon World Cup Grand Prix Freestyle Saturday night to emerge as one of the top combinations in North America after just six months on the Big Tour.

Ashley, a four-time Olympian for Canada who lives with her family in New York, and the 14-year-old KWPN gelding dominated the Freestyle with a score of 76.125 per cent.

Fellow Canadian Karen Pavicic, who rode her Don Daiquiri at the World Equestrian Games in Normandy, France this summer, was second on 73.575 per cent, more than two percentage points better than their previous Freestyle high of 71.400 per cent at Wellington, Florida in February.

Catherine Haddad-Staller of Califon, New Jersey on her Mane Stream Hotmail was third on 73.100 per cent. She recently returned from an extensive competition circuit in Europe where she was based for 20 years.

Ashley and Tiva Nana are now firmly atop the World Cup North American League with the average of their two results at 73.092.

Competition among Canadians and Americans for the two places guaranteed for North America at the World Cup Final is expected to be intense as the annual world championship will be held in Las Vegas in mid-April for the first time since 2009 when it was won by Steffen Peters of San Diego, California on Ravel. Steffen told dressage-news.com he will be vying for a start with Legolas, the horse he has ridden to the U.S. championships for the past three years.

Ashley sat out seeking a place on Canada’s WEG team because, she told dressage-news.com, she did not want to push Tiva Nana faster than the horse was ready. Her stature and influence in the sport was underscored by the lineup of 12 horses and riders in this Freestyle.

Beginning in late March, the pair have started six times on the East Coast of the United States for six straight victories, inclduing the Grand Prix and the Freestyle here.

North American League standings after four of 10 qualifying competitions with the average of the best two results to date:

The United States has totally revamped selection procedures for young horses seeking to compete at the World Young Horse Championships by naming seven CDIs across the country as selection... Read More

AARHUS, Denmark, Aug. 21, 2016--Lucie-Anouk Baumgürtel and Massimiliano 3 wrapped up the European Pony Championships with victory in the Freestyle Sunday after claiming the individual title and leading Germany... Read More