3 months ago StraightArrow Comments Off on Canada, Germany, USA Only Teams Entered for Wellington Nations Cup

WELLINGTON, Florida, Mar. 9, 2022–Canada, Germany and the United States are the only teams entered in the CDIO3* Nations Cup Mar 15-20, the kickoff event in this year’s trans-Atlantic series.

Teams were reported Wednesday for the Nations Cup at the Global Dressage Festival. Although the event has been staged as a CDIO for 11 years as the only competition of its type held outside Europe it became part of the series in 2015.

Germany is the defending champion having it won it for the first time in 2021 and the country took the coronavirus-curtailed series top place. Canada has also won the event once, in 2017 while the Dutta Corp. United States team has claimed the title five times.

A minimum of four teams is required to count for the series ranking so the Wellington results will not factor in the series standings.

Teams entered for Wellington are: 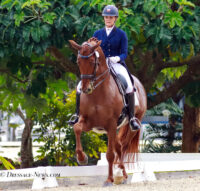 LOXAHATCHEE, Florida, Feb. 5, 2022--Sarah Tubman and First Apple posted their highest Grand Prix score in a year at the Welcome Back to White Fences national competition Saturday ahead... Read More