8 months ago StraightArrow Comments Off on With Equine Herpes Virus in Europe, US Delays Announcement of Observation Events for American Olympic Team Short List

The equine herpes virus outbreak in Europe has delayed announcement of observation events for the short list for the American team for the Tokyo Olympics to the end of March, the U.S. Equestrian Federation notified riders Thursday.

“We will now aim to announce the Observation Events for the Short List no later than March 31,” the federation said of its plan to send up to eight rider and horse combinations to Europe. “It has been our primary aim for the Observation Events to take place in Europe. With the recent news, we are of course re-examining this approach.

“It is likely that the calendar will continue to evolve over the next several days/week(s) and by postponing the announcement of the Observation Event details, we will be in a better position to confirm the plan for the Short List ahead of the Tokyo Olympic Games.”

The coronavirus pandemic continuing to impact horse shows in Europe and the equine herpes virus outbreak that has led to cancellation of events in 10 European countries until Mar. 28 has limited opportunities for U.S. team prospects to compete in Europe.

However, the official calendar shows these events have only one CDI Grand Prix class because of possible restrictions on spectators and likely would not permit more than three or four Americans to enter. Plus, moving the World Equestrian Festival CHIO at Aachen, Germany from early July to September that would be after the Olympics is a major limitation on selection opportunities for Europeans. 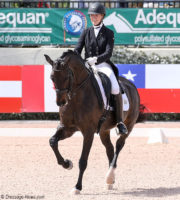