MILL SPRING, North Carolina, Oct. 23, 2020–Abraham Pugh and the American-bred Trakehner stallion Elfenperfekt won the World Cup Grand Prix Friday for the pair’s first Big Tour victory and at the first CDI in the Americas since the coronavirus-triggered suspension of horse sports in mid-March.

Abraham of Greencastle, Pennsylvania and the 14-year-old stallion scored a personal best 68.109% at the show that drew only a handful of competitors. The CDI and the para-dressage national championships being held at the same time were split off from a national show as the show grounds were taken over primarily by hunters and jumpers from the re-scheduled Washington International Horse Show.

Some combinations that pulled out of the Tryon show cited the addition for the first time of CDIs in Wellington, Florida in November and December ahead of the winter-long Adequan Global Dressage Festival as another reason for skipping Tryon.

Ecuador’s Julio Mendoza, based in nearby Columbus, North Carolina, and Rosali were second on 67.022% in the Grand Prix with Jessica Jo Tate on Kynynmont Gunsmoke’s Gideon third on 66.261%.

In the CDI1* Prix St. Georges, Silva Martin made her first international appearance event in 3 1/2 years riding Belrano Gold to a a score of 67.412% . Silva was the sole competitor in the class.

Silva, of Cochraneville, Pennsylvania, was injured in a horse accident in 2014. She competed young horses in Wellington in the winter of 2017, and her last international Small Tour was in Florida in 2015. She has, however, competed at several national shows.

Natalie Pai of Wellington on Utopie Douilly was the only combination in the Under-25 Int. II, scoring 68.771%. 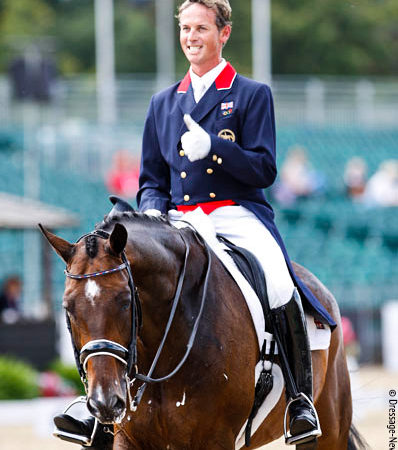 Liebling II, the horse that Carl Hester rode for his first international championship medal and went on to partner other riders on both sides of the Atlantic, has died... Read More