ESSEN-HERBERGEN, Germany, June 12, 2020–Isabel Freese rode Fürsten-Look to victory Friday in the Nürnberger Burg-Pokal of seven to nine-year-old Small Tour horses to kick off the 2020 circuit that had to be restructured after the first competitions were canceled because of the coronavirus pandemic.

The nine-year-old Oldenburg stallion (Fürstenball x Londonderry) and the Norwegian rider were scored 74.585% for the win in the Prix St. Georges Special to earn a start at the final in Frankfurt at Christmas.

Fürsten-Look was last shown two years ago before this competition when the pair placed third in the seven-year-old world championships.

Isabel, who has been based in Germany for 21 years and rides for Paul Schockemöhle of Performance Sales International, has won the prestigious Burg-Pokal twice, on Totilas offspring Total Hope in 2019 and on Vitalis, the stallion that was previously owned by Charlotte Jorst of the United States, in 2016. 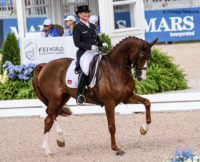