HICKSTEAD, England, July 26, 2019–Lara Butler on Rubin al Asad won the CDIO3* Nations Cup Grand Prix Friday but it was not enough to prevent Portugal from taking the lead in the finale of the trans-Atlantic series in only their second team competition in seven years of the series. The event will be decided by the Grand Prix Special and the Freestyle.

However, personal best scores for Portugal’s João Miguel Torrao on Equador in second on 73.522% and Rodrigo Torres on Fogoso in third on 72.739% as well as Duarte Nogueira in seventh on 70.239% put them in the lead with 12 points based on placings of the top three from each country.

Hailey Watson-Greaves on Rubins Nite placed fifth on 71.174% and Sara Gallop on Bandero were ninth on 68.500% that gave Great Britain a total of 15 points.

Portugal competed in this same event a year ago, the country’s first Nations Cup in the seven years of the series.

The Netherlands were lying third on 23 points with Ireland fourth on 30 points.

The series champion is Sweden for the third year in a row based on points accumulated in its best four competitions in the lineup of eight events that began in Wellington, Florida in March before moving across the Atlantic to Europe.

Unless Great Britain can pull off a win here at home, the top three nations for 2019 are Sweden first, Germany second and the United States third.

Louise Bell and the British-bred Into the Blue posted their first ever CDI victory when the British team pair won the CDI3* Grand Prix Friday.

Louise and the 13-year-old Anglo-European gelding scored 70.304% for the win a week after competing on Great Britain’s Nations Cup team at the World Equestrian Festival in Aachen, Germany.

Laura Tomlinson on Duval’s Capri Sonne Jr. was second on 70.152% with Vicky Thompson Winfield on Mango Jacaro third on 68.891%. 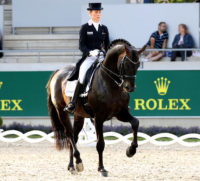