Dorothee and Showtime, 13-year-old Hanoverian gelding, scored 79.783% for the best Grand Prix result since 2016 when the pair was on the Rio Olympic gold medal team and ended that year ranked No. 3 in the world.

With only a handful of results in the past 2 1/2 years as a result of injury timeouts for Showtime, the pair are currently 346th in the world.

Fellow German Hubertus Schmidt and Escolar, a 10-year-old Westfalen stallion, placed second on a personal best score of 77.913% in only the third Big Tour competition for the pair that made its Grand Prix debut at Munich indoors last November.

Isabell Werth and Emilio were fourth on 74.500%, the lowest Big Tour score for the world’s sixth ranked combination. Isabell and the 13 year-old Westfalen gelding are in their fourth year at Grand Prix. The passage/transition to collected walk/passage movement earned the pair their lowest score–fours from all five judges. 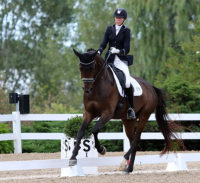