SYDNEY, May 3, 2019–Maree Tomkinson and DMJ Donna Elena won the Sydney CDI3* Grand Prix Special Friday in the first Special and the second victory in only the fourth Big Tour competition for the Australian team rider and the nine-year-old mare.

Maree and the Hanoverian mare (Don Schufro x Bolero) scored 68.830% for the win with all five judges placing the duo first. The pair made their CDI debut six weeks ago with a victory in the Grand Prix.

Maree four Donna Elena when she competed her longtime top mount Diamantina, now retired, on the Australian team at the 2014 World Equestrian Games in Normandy.

“She flew home with us and then after winning the five-year-old and six-year-old at Dressage With the Stars with the record highest score so far, we went back to Europe for the 2016 Rio Olympic campaign with Diamantina and the World Young horse championships with Donna.”

Donna Elena is the youngest of six Grand Prix horses Maree works, and has “great hopes” for the mare’s future.

“My feeling is that she will be a super horse for the future of the sport,” Maree said. “She really has no weakness, she has super gaits, a wonderful character and outstanding rideability and trainability.

“She is almost nine years old now, so still very young. With more balance and competition experience she will be a force to be reckoned with.

“I believe in Donna like no other horse I have ever trained. She is destined for greatness, a seriously international horse. We are very excited about what the future holds for Donna and looking forward to being part of her amazing journey.” 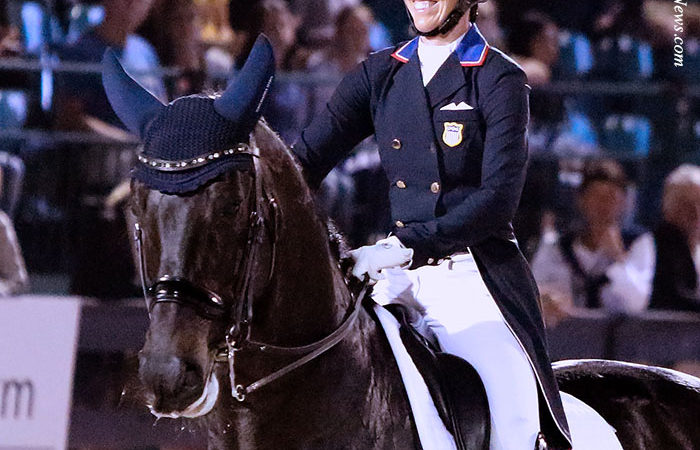 Kasey Perry-Glass & Dublet Vault to World No. 5 Behind Isabell & Trio of Mounts, Laura Graves & Verdades No. 2