WEST PALM BEACH, Florida, Jan. 3, 2019–A lawsuit alleging a horse deal fraud by 2010 FEI “Rising Star” Caroline Roffman, husband Benjamin Meredith and Richard Rockefeller-Silvia has been amended to include Stuart Roffman, Caroline’s father, who was accused in a court filing of seeking to “torpedo” a settlement.

The amended lawsuit to include Stuart Roffman was filed by Ruth A. Green in Palm Beach County Circuit Court alleging that a verbal agreement was made with Caroline Roffman and Benjamin Meredith to pay her $450,000 plus 20 per cent of the sale price of the horse in exchange for not filing a lawsuit “or otherwise subject them to public scrutiny.”

Instead, the suit alleged, Stuart Roffman convinced his daughter and son-in-law to back out of the agreement–“in fact, he tried to torpedo the deal and to negotiate different terms directly with plaintiff via text message.”

A civil suit filed by Ruth Green of Palm Beach last April alleges she was defrauded of $400,000 in the purchase of a show jumper for Benjamin Meredith, who competes as an Australian. The suit alleges she invested in a jumper horse after the sale of a dressage horse in which Caroline Roffman, 30, Benjamin Meredith, 35, both of Wellington, Florida, and Rick Rockefeller-Silvia, 34, were all involved in what was alleged to be a fraudulent scheme. The court was told that Rick Rockefeller-Silvia had not responded to recent court-authorized notices and his whereabouts was unknown.

The amended lawsuit also alleges Caroline Roffman “intentionally hid” from Ruth Green that she was being sued by Alice Tarjan of Frenchtown, New Jersey for alleged fraud in the sale of a horse. That suit was settled in March, 2018. Settlement terms were sealed by the court.

Ruth Green alleged the three defendants secured an investment from her of $400,000 in a horse named Lebron to be bought from the Netherlands for $900,000. Rick Rockefeller-Silvia was to also invest $400,000 and Benjamin Meredith and Carolina Roffman $100,000 and bear the costs of training and upkeep of the horse until it was sold.

“None of the defendants ever contributed any money towards the purchase of Lebron, and further, never intended to do so,” Ruth Green alleged in her suit. “Instead they used plaintiff’s money to purchase Lebron for their own use and benefit.”

However, after she realized the three had “defrauded her,” she met on about Feb. 5 last year with Benjamin Meredith and Stuart Roffman.

“At that meeting, Meredith offered on behalf of himself and Roffman, his wife, to pay plaintiff $450,000 on or before Feb. 7, 2018 and also to pay plaintiff 20 per cent of the profits on the future sale of the horse Lebron if the plaintiff would agree not to file a lawsuit against them, or otherwise subject them to public scrutiny.

“Plaintiff agreed to the terms proposed–i.e. (that is), she would not file a lawsuit if she was paid $450,000 by Feb. 7, 2018 and that she would receive 20 per cent of the profits on the sale of the horse when the horse was sold at the end of the 2018 competition season. In fact, plaintiff and Meredith shook hands on the deal. Plaintiff then shook S. Roffman’s hand, who acknowledged the deal.

After the meeting, the suit alleged, “S. Roffman convinced his daughter Roffman and son-in-law Meredith to back out of the deal that they had struck with plaintiff and not to perform the terms previously agreed upon.

“In fact, he tried to torpedo the deal, and to negotiate different terms directly with plaintiff via text message.”

The amended suit alleged: “S. Roffman was not privileged to interfere with the oral agreement made between Roffman, Meredith and plaintiff.

“As a direct and proximate result of S. Roffman’s tortious conduct, plaintiff has suffered, and continues to suffer, damages.

“Wherefore, plaintiff demands judgment for damages against defendant S. Roffman, together with costs, and for such other relief as the court deems just and proper.” 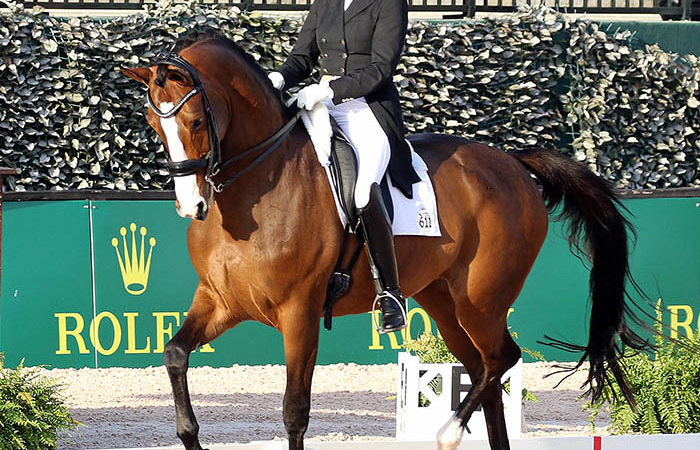