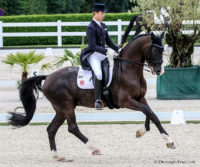 BUDAPEST, Sept. 30, 2018–BenjaminWerndl and Daily Mirrow won the World Cup Grand Prix Freestyle to give the German rider a head start on earning a start in the annual global championship. Morgan Barbançon and Sir Donnerhall II OLD placed second in the freestyle and won the Grand Prix Special on Bolero.

Benjamin and the 14-year-old Westfalen gelding scored a personal best of 78.025 per cent to mark the beginning of the pair’s Big Tour career a year ago.

Morgan Barbançon and Sir Donnerhall II OLD placed second on 75.775 per cent in the first freestyle for Morgan since switching from Spain to ride for France after the World Cup Final in Paris in April.

The 20 points won by Benjamin, 17 for Morgan and 15 for Dorothee go to their standings in the Western European League that in mid-October stages the first of an expanded schedule of 10 events leading to the final in Gothenburg, Sweden next April. 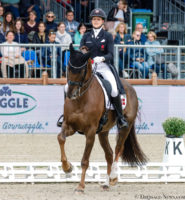 Catherine Dufour on Bohemian Moves to World No. 2 for Rider’s Highest Ever Ranking Behind Jessica von Bredow-Werndl on Dalera at Top for 2nd Month

Cathrine Dufour of Denmark climbed to her highest ever world ranking at No. 2 on Bohemian, her Olympic and European Championship partner, with Germany's Jessica von Bredow-Werndl on TSF... Read More

MADRID, Mar. 27, 2018--The Spanish Equestrian Federation has denounced as "false" accusation made to Spain's taxation agency of alleged irregularities in payment of expenses to officials including dressage director... Read More

Face coverings/masks will not be required of fully vaccinated individuals as long as social distance is maintained at American outdoor competitions beginning May 17, the U.S. Equestrian Federation announced... Read More