The team combinations and alternate horses for the WEG with dressage competition starying Sept. 12 is:

Reserves are Antonia Ramel and  Brother de Jeu and Rose Mathisen and Zuidenwind.

Tinne is one of the most celebrated riders in the world with seven Olympics and the past three world championsips–with Don Auriello as her partner at the Olympics in London in 2012 and Rio de Janeiro in 2016 as well as the WEG in Normandy in 2014. Tinne rode Don Auriello in his international Big Tour debut in Florida in February, 2011.

Patrik, based in Germany and married to Australia’s Lyndal Oatley who is expecting their first child, rode for Sweden at the last three Olympics, with Deja his mount at Rio, and the 2010 and 2014 WEGs.

Juliette and Buriel were on the Rio Olympic team.

Therese and Dante Weltino were the highest placed combinations for Sweden in the Grand Prix, Special and Freestyle at the 2017 European Championships. 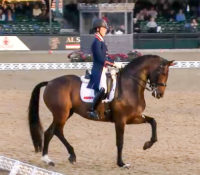