Adelinde and the 12-year-old KWPN stallion scored 75.320 per cent, the highest score at any Grand Prix level in 13 starts since beginning Big Tour in May last year.

For Adelinde, No. 1 in the world on the now-retired Jerich Parzival, and Aqiedo the previous Grand Prix best was 73.060 per cent and the highest ever result for the duo before Friday was 75.039 per cent in the freestyle, both at the same show in March this year.

Great Britain’s Michael Eilberg on Marakov that he rode at the European Championships in 2015 placed second on 71.920 per cent.

Denmark’s Anders Dahl on the American-bred Selten HW was third on 71.900 per cent. 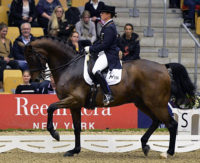