GOTHENBURG, Sweden, Feb. 24, 2017–Isabell Werth on Emilio won the World Cup Grand Prix Freestyle Friday in only their second musical performance and the German superstar became first rider to win competitions to qualify for the Final on three different horses in the same year.

Patrik Kittel, competing at home on Delaunay placed second on 80.910 per cent to earn 17 points that boosted him into contention for an invitation to the Final in Omaha Mar. 27-April 2 but he has said he won’t make the trip to the American Midwest.

Germany’s Jessica von Bredow-Werndl on Unee BB was third on 80.845 per cent that moved the rider into the sixth spot in the rankings. Jessica took bronze at the Final in Las Vegas in 2015.

Germany’s Fabienne Lütkemeier on D’Agostino is also likely to have earned an invite to start in Omaha with her fourth place finish on 77.370 per cent that was enough to move her into a tie for third place in the standings.

Kristy Oatley of Australia remained in second behind Isabell.

Carl Hester of Great Britain, who like Kristy did not compete here, is in the three-way tie for third along with Fabienne and Marcela Krinke Susmelj of Switzerland.

Ireland’s Judy Reynolds and Madeleine Witte-Vrees of the Netherlands are possible contenders for a start among the 18 finalists in Omaha.

The final lineup for Omaha won’t be decided until the World Cup in ‘s-Hertogenbosch, Netherlands Mar. 9-12 as the last of nine events in the Western European League.

A World Cup in the North American League is being staged this same weekend at the Adequan Global Dressage Festival in Wellington, Florida with two more–one in Wellington and the other in Burbank, California–to determine the two spots available in that geographic group. 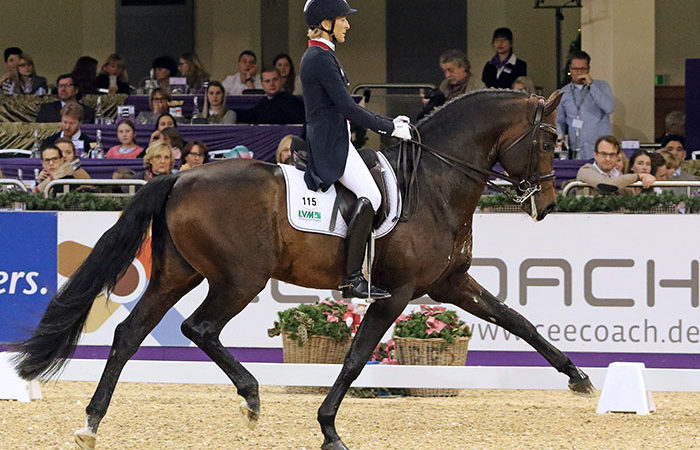