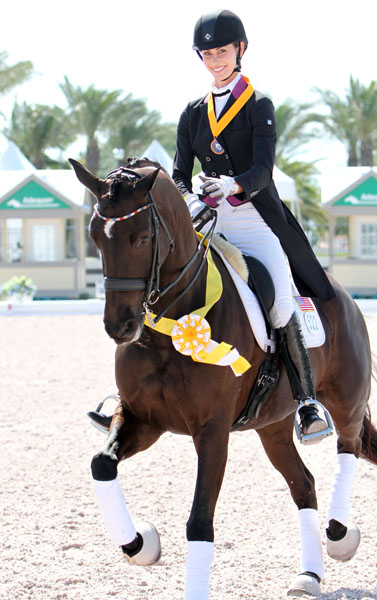 Denmark’s Kristine Moller and Reve En Noir won the Prix St. Georges at Compiègne, France CDI3* Friday whie Caroline Roffman competing for the first time outside the United States rode Her Highness O to second place, the only two combinations to score above 70 per cent.

The 24-year-old Caroline of Wellington, Florida and Her Highness O that is her own horse led until Kristine and Reve En Noir, the last to go in the starting lineup of 36 horses and riders from 12 nations.

Kristine and Reve En Noir scored 71.316 per ent while Caroline and Her Highness O were at 70.500 per cent. Great Britain’s Gareth Hughes and Aramis T were third on 69.737 per cent.

Asked after the class about her result, she laughed: “I’m never coming home.”

“What a wonderful experience. I’d be lying if I said I was not peeing my pants–the horses here are incredible, the riders are incredible. It’s pretty amazing.

“I was quite conservative. I had mistakes, it was not a perfect test. I tried to be conservatve and careful.

“The horse handled it beautifully, went in there all business.

“I feel a little baffled. I hear all these stories of Americans coming to Europe and getting low scores. I’m happy to be able to be in the ribbons. I’m so thrilled, very proud and happy.”

By the time Caroline and Her Highness O entered the arena as the 24th in the starting lineup, only three marks of better than 70 per cent had been awarded by any of the five judges at that stage, and no more than one score at that level to any rider.

The American received scores of at least 70 per cent from three judges, the highest being 73.158 per cent, and was placed first by two judges as was Kristine and  and Reve En Noir.

Caroline was riding at this international show whch has attracted Carl Hester and Charlotte Dujardin of Great Britain’s 2012 Olympic gold medal team in the Grand Prix as her first ever competition outside the United States.

The pair is ranked fourth in the U.S. The combination was on the USA 1 gold medal team at the Wellington Nations Cup last month and also won individual bronze in the CDIO3*. And in 2012, they won the U.S. Developing Horse Championship.

She scratched Sagacious HF from the Grand Prix that was to be preparation to becoming the first American to compete in the highly competitive Under-25 division at the World Equestrian Festival in Aachen, Germany, the globe’s premier horse show as well as ride Her Highness O in the small tour in a month’s time. The horse appeared to be feeling the effects of travel and was not presented for the veterinary inspection.

After a day’s rest, Sagacious appeared fully recovered and was lightly worked Friday

Caroline and the two horses have been training in Saumur, France with three-time Spanish Olympian Juan Matute and his family, now based in Wellington but spend the summer in Europe where their two children are highly successful riders.

Caroline and Sagacious is the top ranked combination in the Brentina Cup Under-25 division in the United States and Her Highness is among the highest on the Tim Dutta National Intermediate I Championship rankings with an average of 71.414 per cent, just 0.105 per cent off the lead.

Caroline took over the ride last July on the 14-year-old KWPN gelding (Welt Hit II x Cocktail), who won team gold and individual silver for Lauren Sammis of the United States at the 2007 Pan American Games at small tour.

Sagacious HF confirmed himself with two scores well above 70 per cent in CDI U25 events on the Florida winter circuit this year, the last year in the division for the rider who was the FEI Rising Star in 2010.