WELLINGTON, Florida, Mar. 3, 2022–Brittany Fraser-Beaulieu and All In, Canada’s Olympic team partnership, captured the Global Dressage Festival World Cup Short Grand Prix Thursday with hopes of receiving an invitation to next month’s Final that would be the rider’s first appearance in the annual global championship.

Brittany and All In, 17-year-old KWPN gelding that she has been partnered for the past 12 years, scored 71.447% for the win.

Codi Harrison of Wellington and Katholt’s Bossco were third on 68.368%. The pair currently standing second in the North American League and are seeking to cement that position in Friday night’s Freestyle to clinch a start for one of two North American slots in the Final. Ashley Holzer of Wellington has already wrapped up the top spot.

Brittany, 33 years old, will take time out late in the summer to give birth to her second child due in September that will keep the pair from competing in the world championships in Herning, Denmark.

Despite his age, Brittany said, All In is “just a horse of a lifetime. He comes out every time and tries his best. Some days he might be a little fresher or stronger than others, but he still enjoys his job. He loves to come out here and compete.

“… Going to the Olympics on a horse that you’ve had since five is like a dream. You know, when you buy a young horse, of course that would be the goal. But realistically it doesn’t always happen. But All In and I have such a strong partnership together, and the Olympics–just to spend that much time together for so long–I felt grew our partnership even more.”

In addition to the Tokyo Olympics, Brittany and All In competed for Canada at the 2018 World Equestrian Games in Tryon and on the silver medal team at the 2015 Pan American Games in Toronto.

The pair were invited to the World Cup last year but it was canceled because of coronavirus and the equine herpes virus outbreak in Europe. 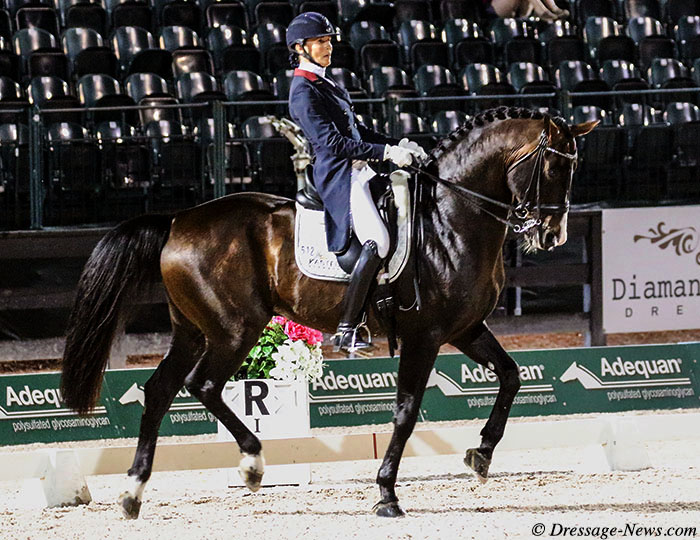