Jennifer of Olympia, Washington and the Danish Warmblood gelding were awarded 72.956% that was also the highest Grand Prix score in the U.S. rankings of combinations seeking to be on the American team at the world championships in Herning, Denmark this summer.

Ashley Holzer of Wellington placed second on Valentine on 71.848% with Great Britain’s Susan Pape on Harmony’s Eclectisch third on 69.848%.

Tinne, a seven-time Olympian for Sweden, and the 13-year-old Holsteiner gelding, scored 71.457% for their victory. Tinne began international competition on Devanto at Wellington a year ago and competed once at Big Tour in Europe in May.

Jennifer Williams first competed Millione in 2016 at Small Tour and moved up to Grand Prix two years later. The duo focused on competition at Global in 2020 and 2021, capped by Nations Cup performances at Global last March and at the prestigious World Equestrian Festival in Aachen, Germany in September.

The ride Thursday, she said, was “the most relaxed I have ever felt him in the ring. He’s had several mistake-free tests but I didn’t quite capture the harmony I was looking for and the relaxation and today I felt that’s what we captured on top of a mistake-free test.”

Jennifer said she is on the American list of candidates for the world championships but making the team of four is not a goal because of his age. “I think every day every show is such a blessing and so much gravy at this point,” she said. “As long as he’s having a good time and we’re improving and he feels like he still wants to go out and do it we’ll just keep going and see where that takes us. It’s important to me he ends on a high, on a really good note.

“Definitely this is his last international season.”

Tinne is in her 12th year on the Florida circuit competing horses for the Swedish stud Lövsta Stuteri. Among her mounts was Don Auriello that she debuted at Big Tour in Florida and went on to compete for Sweden at the 2012 and 2016 Olympics.

Of  Thursday’s performance by Devanto, that currently is one of her two international Big Tour mounts, she said: I think this was the first time with a little atmosphere that we were together in the ring.”

Unusual in the international arena was to see a former German team rider, Christoph Koschel, on a Lusitano, Favorito, a 12-year-old stallion that he found in Portugal and making their debut at Big Tour at Global. The pair scored 69.217% for fourth place in the Grand Prix. 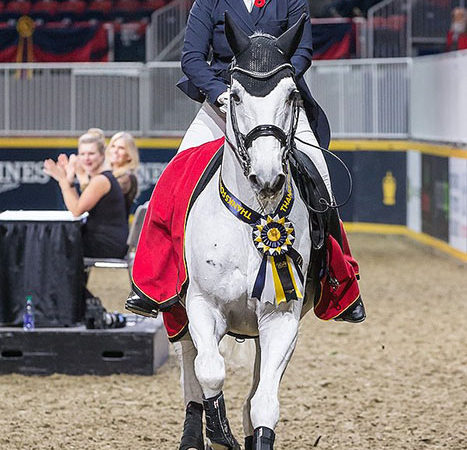 TORONTO, Nov. 7, 2018--D Niro, the Olympic and Word Cup mountfor Jacqueline Brooks, was officially retired in an emotional ceremony at the prestigious Royal Horse Show at home in... Read More