THORNTON, Ontario, May 5, 2019–Naima Moreira Laliberte and Statesman improved their Pan American Games ranking with Big Tour results at the weather-disrupted Kawartha Spring Classic CDI3*, the first of four qualifying events in Canada for the continental championships less than three months away.

Naima Moreira Laliberte and the 12-year-old Statesman scored 67.957% in the Grand Prix and 71.681% in the Special, the third set of qualifyng scores to confirm the combination’s ranking behind Jill Irving on Degas. Both are seeking a place on the team of mixed Big and Small Tour riders and horses to compete for one of two places at the Pan Ams to earn a team slot at the Olympics n Tokyo next year.

The Canadian federation has not announced the makeup of the four-member team for the Lima, Peru Pan Ams but must include at least one Big Tour duo to qualify for Tokyo.

Lori Bell and Flirt produced the pair’s best Small Tour scores, but not enough to challenge the top ranked pairs of Tina Irwin on Laurencio, Lindsay Kellock on Floratina and Belinda Trussell on Carlucci. The three leading combinations, whose scores were accumulated during the winter-long Global Dressage Festival in Wellington, Florida have yet to fulfill the requirement to compete at a qualifying CDI after April.

Lori and the 11-year-old Oldenburg gelding scored 70.088% in the Prix St. Georges and 70.265% in Int. 1, the highest scores for the combination since qualifying began at the start of the year. The pair ended the Global Dressage Festival circuit in Wellington, Florida with averages of 67.477 at St. Georges and 66.245 at Int. 1.

Canada will face Brazil and Mexico and possibly other nations for the two team places at the Tokyo Games. The United States is already qualified with its team silver performance at the World Games in Tryon last fall. 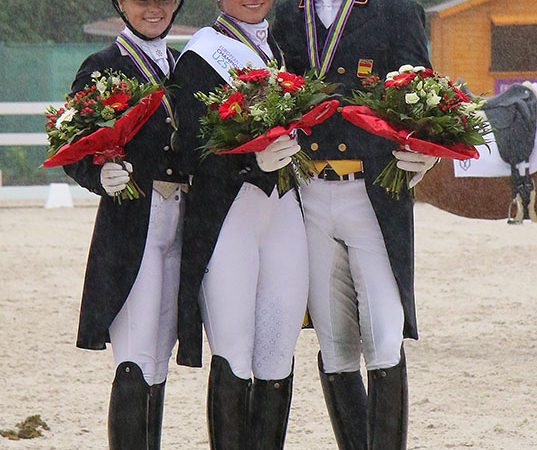 Germany's Lisa-Maria Klossinger and FBW Daktari jumped to No. 2 Under-25 combination in the world from 27th the previous month and Spain's Juan Matute, Jr. on Quantico Ymas made... Read More