Juan Matute Guimon underwent surgery for three hours Wednesday a day after being admitted to a Madrid hospital when the 22-year-old rider for Spain collapsed with bleeding in the brain.

Juan was reportedly still in critical condition although details of the surgery at the Hospital Universitario la Paz in Madrid were not known, and there was no indication of the prognosis.

Juan Matute Azpitarte, his father, a three-time Olympian for Spain and also coach of his son, and Juan’s mother, Maria, were at the hospital. His sister, Paula, was in Wellington.

Juan, who was raised with his family in Wellington, Florida and has both American and Spanish citizenship, had been flown by helicopter to the hospital when he collapsed after riding Tuesday.

Juan said that his son, who had moved to Spain two years ago to go to university and pursue his dressage, had complained of severe headaches in the past week. They initially thought it may have been an allergy.

After Juan was taken to the hospital, the father told dressage-news.com his condition was “very critical.”

Tens of thousands of dressage fans from around the world texted support for Juan and said they were praying for his recovery.

Juan was on the Spanish team at the World Equestrian Games in Tryon in 2018 that helped the country earn a starting place at the Olympics that were postponed for a year from this summer to 2021.

Juan returned to Wellington for the Global Dressage Festival this winter in what appeared to be a successful attempt to qualify for the World Cup Final in Las Vegas, but it was canceled due to the coronavirus pandemic.

He is currently ranked second and third on two different horses among Spanish combinations on the world ranking list. 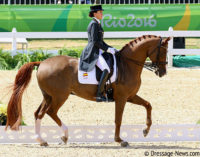 Beatriz Ferrer-Salat, Spain's Olympic and World Equestrian Games medalist, has been elected as the dressage representative to the International Equestrian Federation (FEI) Athletes' and the Dressage Committee for four... Read More
Enter your email address