1 year ago StraightArrow Comments Off on North American Youth Championships Set for Traverse City, Michigan for Next Three Years Faced With Sharp Decline in Particpation

LEXINGTON, Kentucky, Oct. 29, 2019–Great Lakes Equestrian Festival in Traverse City, Michigan has been selected as the host of the North American Youth Championships of dressage and jumping for the next three years faced with a sharp decline in dressage participation over the past decade.

The United States Equestrian Federation announced the selection for 2020, 2021 and 2022, the first time for the venue that is about 200 miles/320km from Sault Ste. Marie in Ontario, Canada and 255 miles/410km from Detroit.

The selection requires approval from the International Equestrian Federation (FEI). The United States and Canada are the major participants with dressage teams from different geographic regions in the two countries. In recent years, individual Mexican combinations have competed.

Competition will be staged at the Flintfields Horse Park in Traverse City Aug. 4-9, 2020 for the initial year.

US Equestrian said NAYC offers an elite opportunity for rising talent to build confidence in both a team and individual championship competition environment, while representing their country under international FEI rules.

“The competition format, which emulates that of senior championship competition, is essential in the continued development of athletes, while ensuring future success for US Equestrian’s Olympic programs.”

Bill Moroney, US Equestrian Chief Executive Officer, said: “This competition is essential in order to continue building our Olympic programs, as younger generations of athletes are able to gain the valuable experience they need to excel at the next level.” 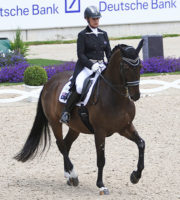