Hanna Karasiova also of Belarus on Zodiak was third on 66.826%.

The Freestyle to determine points to qualify for Las Vegas is scheduled for Sunday with only one other event to go–in Poland next week–in the 2019-20 Central European League that gets to send two combinations to the annual championship.

Olga Safronova is second behind Hanna Karasiova in the Central European standings. 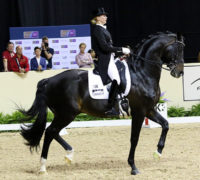 OMAHA, Nebraska, Mar. 24, 2017--Unee BB, winner of bronze at both the 2015 and 2016 World Cup Finals, has been withdrawn from the Omaha championship by German rider Jessica... Read More
Enter your email address