Katherine of Wellington and the 14-year-old KWPN gelding were awarded 74.695 per cent for the win, two days after capturing the Grand Prix.

Rebecca Waite of Loxahatchee, Florida and Doktor placed second on 71.945 per cent with Bent Jensen, the 1992 Olympian for Denmark who has long ridden under the Stars and Stripes, was third on Chance on 70.125 per cent.

Katherine has been competing Alcazar at CDI for Jane Forbes Clark since small tour six years ago and moved up to Grand Prix in March, 2015. She works with Ashley Holzer in winter in Florida and Carl Hester in England in summer.

She has tentative plans to go to Europe again this summer with the World Equestrian Festival CDIO5* Nations Cup in Aachen, Germany as a goal.

If Aachen happens it will be the first time she has been back to the event since 2016 when Alcazar had to be hospitalized with a colic so severe there were fears for the life of the horse.

However, the pair returned to Wellington and six months later an emotional Katherine competed Alcazar at the Global Dressage Festival . 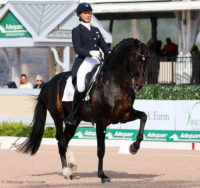