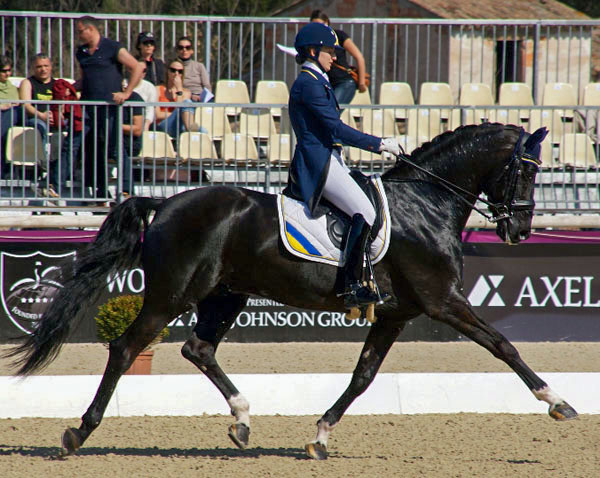 Inna and the 17-year-old Oldenburg stallion 76.025 per cent, the highest score in two years for the Ukraine Olympic and World Games partnership but had no impact on the two places reserved for Central Europe out of the 18 in the final. Russians Regina Isachkina and Stanislav Cherednichenko are tied atop the league standings with 68 points and will be invited to Gothenburg, Sweden April 3-7.

On Fleraro, a 16-year-old Danish Warmblood gelding, she placed second on 75.925 per cent that was a personal best.

Inna competed at the inaugural Madrid World Cup event to earn seven points, and with her two Ukraine victories each worth 20 points was not enough to match the top five Central European riders–three Russians and two from Belarus.

Political and military hositilities between Russia and Ukraine have led to riders from the two nations not competing in each other’s qualifying events. Russia had four qualifiers this year and Belarus, closely aligned with Russia, one. Ukraine had two qualifiers.

International Equestrian Federation (FEI) rules provide for two Central Europeans riders with the greatest number of points qualifying for the annual championship final, with 20 points going to the winner of a World Cup Freestyle and declining points for lower placings.

The two Russian top qualifying combinations each accumulated 68 points, Stanlislav Cherednichenko from three shows in Russia and one in Belarus while Regina Isachkina earned her points at two shows in Poland and two in Russia.

Maksim Kovshov and at least one other Ukraine rider competed in a qualifier in Poland as well as the two at home.

TOKYO, July 11, 2018--Equestrian Park to be used for dressage and jumping at the 2020 Olympics was among the venues described as "very, very impressive" by International Olympic Committee... Read More
Enter your email address