Beatriz and the 17-year-old Westfalen gelding, the highest ranked Spanish combination at No. 16 in the world, scored 81.285 per cent for a sweep of the Madrid event. Madrid this year joined the World Cup Western European League lineup for the Final in Gothenburg, Sweden next April.

Beatriz, recently elected by her peers as the athlete representative to the FEI Dressage Committee, signaled that Delgado will “sometime next year, depending on how he feels” when he will be 18 years old. The pair began Big Tour in 2010 and since then have competed at the 2016 Olympics and 2018 World Games as well as the 2015 European Championships to claim the Freestyle bronze medal.

Portugal’s Maria Caetano on Coroada were third on 77.655 per cent, also a personal best in only the fourth Big Tour musical performance since starting Grand Prix in May.

Morgan Barbançon Mestre who rode for Spain before switching to France last April benefited the most in the Western European standings from points earned in the fourth of 10 World Cup qualifiers. She and Bolero finished 10th Sunday to earn seven points for a total of 38 and move to third place in overall standings behind Germans Dorothee Schneider on 50 points and Benjamin Werndl on 45 points.

Maria Caetano’s third place earned her enough points to move into a tie for fourth place with Daniel Bachmann Andersen of Denmark.

The next WEL event is at Salzburg, Austria Dec. 5-9. 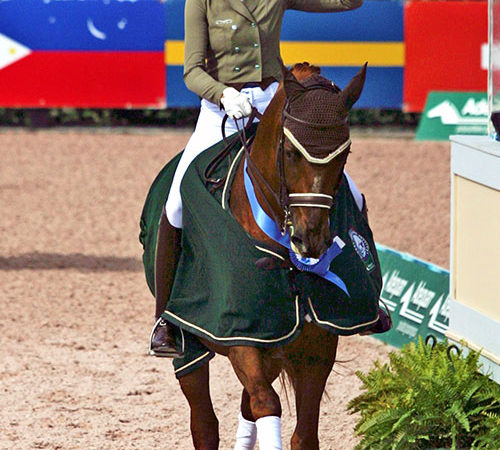