WELLINGTON, Florida, Mar. 24, 2018–Equestrians of all disciplines joined the #RideForOurLives parade at the Winter Equestrian Festival Saturday as one of thousands of demonstrations across the United States seeking to end gun violence in American schools.

Led by Meredith Michaels-Beerbaum, the American who became one of the world’s top riders for Germany, her husband Markus and daughter Brianne, hundreds of equestrians marched at the Palm Beach International Equestrian Center, less than an hour from the Marjory Stoneman Douglas High School in Parkland where 17 people were killed last month, the latest such tragedy.

Beezie Madden, Lauren Hough, Jennifer Gates, Danielle Torano, Jessica Springsteen and the legendary George Morris were among riders taking part in the demonstration. Laura Kraut and Georgina Bloomberg, though not in Wellington, declared their support.

As the largest equestrian community in the Americas, Wellington is leading the movement to unite equestrians across the country in the mission to keep children safe in schools and remember the victims of school violence.

Meredith is from California, and is a three-time Olympian for Germany who, with Markus, has spent winters in Florida for many years. She was deeply moved by the tragedy and rallied equestrians to make a strong, unified statement to protect children in schools.

“This is not about right or left,” said Meredith. “This is about protecting our children and standing up for them. We encourage the equestrian community to take a stand to show that we need to do something about gun violence in schools in the United States. We ride together today as a testament that it’s time to take action.

“”We’re not standing for a specific rule change or a specific political party; this is a bipartisan effort to unite behind the fact that we don’t want our children killed in schools anymore.”

Katherine Bellissimo, Managing Partner of Wellington Equestrian Partners that owns and operates the show grounds that includes the Global Dressage Festival facility, is a strong supporter of the effort.

A memorial will be staged at the Palm Beach show grounds Saturday, Mar. 31 before the nigh’s jumping grand prix where the Marjory Stoneman Douglas High School choir will sing, and 17 horses and riders will stand in memory of the lives lost.

“We are committed to protecting and growing the future of our sport,” Katherine said, “and keeping our children safe is critical. The vision of our partnership is to unite equestrians in all layers of life, and this plays into that goal in an even more meaningful level. We are all equestrians, but we are also a community of parents who love our children and want to protect them.” 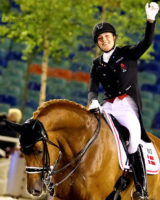 Cathrine Dufour who rode her Cassidy to a double victory over German superstar Isabell Werth disclosed Saturday she is seeking to go to the World Cup Final in Paris... Read More
Enter your email address