Steffen and the 11-year-old Rhinelander mare scored 74.700 per cent for the win with only three starting combinations in the third of four events in the new California dressage circuit.

Charlotte Jorst of Reno, Nevada and Kastel’s Nintendo were second on 72.450 per cent with Kristine Howe of the Central California community of Stratford on Loanshark third on 63.950 per cent.

The last CDI for Steffen and Rosamunde before this week was at this same venue in April, 2017, shortly after competing at the World Cup Final in Omaha. The pair competed in a national show last November.

Before the freestyle, Helen Langehanenberg gave a master class that included Steffen riding Suppenkasper, the 10-year-old KWPN gelding that the German Olympian trained to Grand Prix before being sold to Four Winds Farm last summer as a U.S. team prospect for Steffen.

The clearly emotional Helen described Suppenkasper as one of the best horses in the world but said. “I thank heaven this horse came to you because he deserved it… he’s so special and he deserves the best home he can get.”

Both Rosamunde and Suppenkasper are owned by Four Winds Farm of Akiko Yamazaki and Jerry Yang. 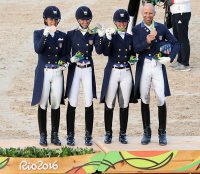 WELLINGTON, Florida, Mar. 12, 2017--America's Olympic team riders again received higher scores in Europe than at home at the Adequan Global Dressage Festival, according to a review of 2016... Read More
Enter your email address