Laura and her 15-year-old KWPN gelding, ranked No. 4 in the world, turned in the second best individual result of the day at 79.514 per cent behind only the top in the world, German superstar Isabell Werth on her Olympic team gold and Omaha World Cup champion mount Weihegold OLD.

The American team performance in the Grand Prix at the midpoint of the most competitive Nations Cup on the seven-event trans-Atlantic schedule was before an audience a 4,800 spectators in the spectacular Deutsche Bank stadium. The Grand Prix Special to decide the event is scheduled for Saturday.

The U.S. had mixed fortunes in this Nations Cup that had the atmosphere of a championship as most of the countries competing are using this event to select their teams for the European Championships next month. The presence of an American team, with two combinations from the Rio Olympic Games bronze medal squad, added to the depth of competition.

Laura of Geneva. Florida and the KWPN gelding that was bought as a foal from a video and she has taken to the 2016 Olympics for team bronze, the 2014 World Games, 2015 Pan American Games team gold and individual silver medals as well as 2015 U.S. Grand Prix champion were clearly going for it.

This CHIO in which she is competing for only the second time also means much to Laura, for the quality of the competition, the organization, the treatment of the riders, all of which she described as “amazing.”

Laura told dressage-news.com that Verdades felt amazing in the warm up.

“He gets super excited when he knows he is next to go into the arena,” she said.

She said she felt no pressure going in as the last rider of the competition as the team mates “are all such good friends and we only want the best for each other. We’re riding every test this year in preparation for next year.”

The duo were scoring as high as 82 per cent, including a mark of the maximum of 10 from one judge, before a mistake in the two-tempi changes that earned them fours from all seven judges and dropped dropped the score. She still, however, placed second individually and was key to the team being in the silver medal position.

Even so, she said, “I’m a little tired of being the bridesmaid. I want to win. That’s not pressure. That’s a goal of mine. It’s something the horse deserves and I know he has the capability as his scope is unparalleled.”

Adrienne Lyle of Ketchum, Idaho, who rode Wizard for the United States at the 2012 London Olympics and the 2014 World Games, was the first to go for the Americans on Salvino, the 10-year-old Hanoverian gelding that she has been training for the past two years.

This was only their third international competition, the first in Wellington, Florida in March and the second at Rotterdam, Netherlands a month ago. Adrienne’s plans were to compete at another small CDI in Germany then go home to continue developing the horse that is seen as a top prospect for next year’s World Games in Tryon, North Carolina and the Olympics in Tokyo in 2020.

Instead, the pair was drafted for this team.

Adrienne, who has worked with and for Debbie McDonald for the past decade–Debbie is the coach of all four combinations on this team–held back from pushing the horse though she felt Salvino could deliver more.

“It felt good,” she told dressage-news.com, “but I thought, ‘stick to the training.’ We did and I’m really happy with the result. He handled himself beautifully. He wasn’t affected at all by the atmosphere.”

The result was 71.814 per cent, that placed the duo 13th individually in the field of 13 starters.

Elizabeth Juliano, present as she often is as a supporter of Laura Graves and dressage programs, was emotional with the performance. It was the first time that a horse in which is an owner has competed in an international team competition.

Kasey Perry-Glass, based in Wellington, Florida was the second to go the for U.S. on her Olympic mount Dublet, a 14-year-old Danish Warmblood gelding.

The combination received several marks of eight for both the lines of two-tempi and one-tempi changes and appeared in position to turn in another good for the U.S.

But Dublet clearly did not want to make the first pirouette, to the left, received no mark for the movement that has a co-efficient of two–two times the score. However, Kasey circled back and made a remarkable recovery going into the right pirouette for which they were rewarded with marks from seven to eight.

The mistake in the pirouette and the submission score with one judge giving the pair four while the other six ranged from six to seven impacted their final result, that was 68.929 per cent.

Olivia LaGoy-Weltz of Haymarket, Virginia on Lonoir scored 71.514 per cent to help assure the U.S. team of their runner up position. 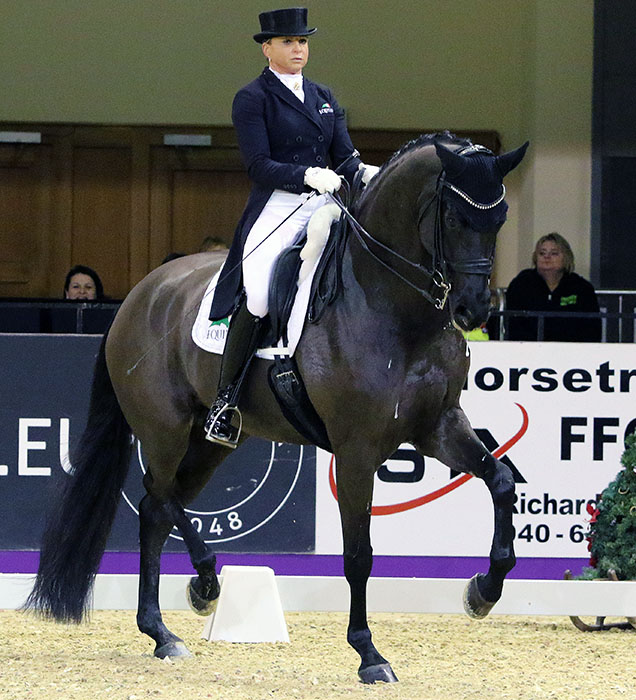