SEOUL, July 3, 2017–Samsung’s agreement to provide $18.6/€16.3 million in funding for an equestrian venture in Germany for a South Korean dressage rider has become a central issue in a corruption trial that The Wall Street Journal reported Monday could disrupt succession at the top of one of the world’s largest conglomerates.

“Three months into the trial,” the Journal reported, “the prosecutors’ criminal case is riding on what they describe as a form of horse-trading: an effort by Samsung to channel money for political favors by funding the equestrian aspirations of the daughter of a close friend of the country’s former president.” The president was forced to resign.

A central issue in the trial is the funding of Core Sports International GmbH, a small German sports-consulting company prosecutors say was controlled by former president Park Geun-hye’s close friend, Choi Soon-sil. Core Sports had one client: Ms. Choi’s daughter, Chung Yoo-ra, a dressage rider who competed on the Korean gold medal team at the 2014 Asian Games. The German venture was based in Biblis, a small town south of Frankfurt.

The goal, according to Samsung, was  to develop Korean dressage teams for the 2018 Asian Games and the World Equestrian Games in Tryon, North Carolina.

The team was supposed to include six riders with 12 horses, according to Samsung’s contract as reported by Reuters, but never grew beyond Chung Yoo-ra and her coach.

The rider is listed in the International Equestrian Federation (FEI) database as competing four horses–Rausing, Royal Red, Salvator and Vitana V. Reuters reported that Vitana V was bought for €1/$1.13 million for Vitana that was competed for two years by Spain’s Morgan Barbançon,

Samsung heir Lee Jae-yong was arrested in February and is accused of having ordered his company to fund the dressage efforts so Ms. Choi would have the then-president direct the country’s pension service to vote in favor of a 2015 merger of two Samsung affiliates. The Journal said prosecutors saw that as a critical step in consolidating Lee Jae-yong’s grip on control of Samsung Electronics, the world’s biggest smartphone maker. 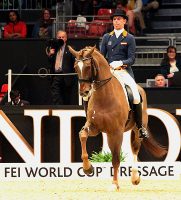