VERDEN, Germany, Aug. 7, 2015–America’s Endel Ots rode Lucky Strike to a start in the World Championships for five-year-olds, and takes the same route with Samhitas to try to finish in the top three of the “small” final to go on to the six-year-old championships.

The 26-year-old Endel of Wellington, Florida and the Hanoverian gelding (Lord Laurie x His Highness) scored 8.68 to place second in the “small” final behind Germany’s Claudia Rüscher on Florina and assure the pair of being among the top three to move into the final scheduled for Saturday.

The “small” final, so named because it include 29 horses from the preliminary class that did not finish in top 12 Thursday, was a nail biter to the end.

Endel and Lucky Strike, that he owns with his father, were the third last to go. He had timed the warmup perfectly. But he and Lucky Strike had to start 10 minutes later than scheduled when commentary by the ground jury on previous rides ran long

“I know my horse better than anything,” he explained. “When I know what the judges are looking for I can present him better.

Despite the delay in the start time, the canter had more jump and he could stretch Lucky Strike more in the walk.

“He always tries,” he said, “sometimes too hard because he’s still a young give-year-old.

“I wanted to leave everything on the line today, and we did. He’s not a quitter. He enjoys it. He’s pumped up by the crowds.” 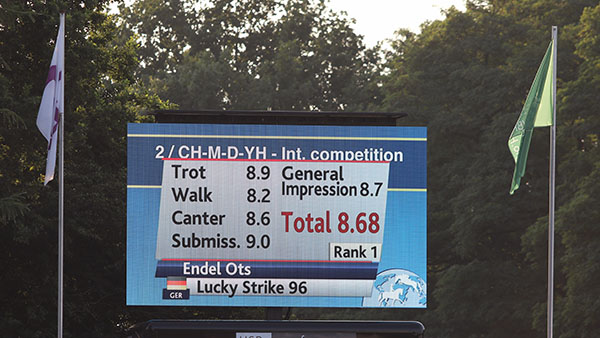 When the first score of 8.9 for the trot came up, it appeared his plan worked. It was followed by 8.2 for the walk, 8.6 for the canter, 9 for rideability and 8.7 for general impression, enough to gave the pair the No. 1 ranking to that stage, a place in the final assured. The next ride was by the eventual winner while the last ride did not change the placings.

Endel will be among the final 15 in the world championships in his first international rated show outside the United States.

He’ll go over plans with what he calls his “nations of advisors”–primarily U.S. Young Horse Coach Christine Traurig and Evie Strasser, the Canadian team rider who has freely shared with Endel  her extensive knowledge and experience in competing and training in Europe.

“For tomorrow (Saturday) we will do less,” he said. “I’ll keep an eye on the time and know to the second second how to manage the warmup. As long as I know the timing I have a good plan.

“I have a tendency to want to get on with things; I’m always chomping at the bit. I have to keep that under control–a bit less warmup but ride the same so when he gets into the trot and the walk he has enough energy to push through.

“I’ll listen to the advice but I’ll go with my gut. Every time I’ve not gone with my gut I’ve regretted it.”

Christine Traurig said of the Endel’s ride: “Today worked out just as we had all planned.and hoped for. Endel is a super rider, he knows the horse very well and was very well prepared. His horse was so with him in the test and showed quality and consistency again today. A wonderful statement for U.S. dressage”

On the Canadian-owned Samhitas he finished 24th with a score of 7.54 in the six-year-old qualifier for the world championships final. That means the pair must go through the same procedure as with Lucky Strike and compete in the “small” final to try to make it to the group of 15 to battle for the title.

The ride in only the fourth competition for the partnership he described as like being on “pin and needles.”

Although the trot by the Oldenburg gelding (Sir Donnerhall I x Abanos) can be spectacular, it was a stretch for the horse Friday as he was “pumped” by the atmosphere while the canter was a bit hard. He was, though, happy with the walk that he said gets better and better every day.

To prepare for the “small” final, Endel he might walk and ride the horse earlier in the day.

“For me, the most important thing is I’ve got to keep practicing.”

He couldn’t speak highly enough of the support by Jean and Gary van der Ploeg who own Samhitas.

“They could have picked anybody in Canada to ride him,” he said. “I cannot say enough nice things about them.

‘They’re not ribbon chasers but are in it for the long haul. I’m so happy to have people like that around me.”

Endel said of his first world championships, “it’s great, awesome, really fun. Riding out here with these horses of such high caliber makes you stretch yourself to ride better and push yourself further. I like to stretch.

“Every day is a little bit better than the last day. That’s been the theme of this trip.”